The Book of Secrets by Melissa McShane 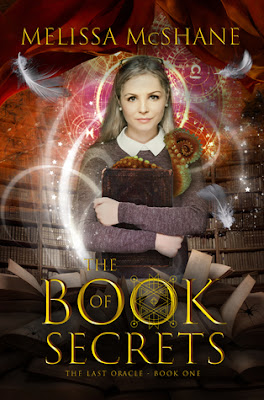 Name : The Book of Secrets

Helena Davies just wants a job that will get her out of her parents’ basement. Abernathy’s Bookstore is disorganized, out of the way, and smells funny, but it pays well and promises to at least be interesting. She has no idea how interesting her life will become. By the end of the first day, Helena has a dead boss in the basement, an unexpected promotion, and the news that she is now a part of an endless war against creatures from another reality.

As Abernathy’s newest custodian, Helena is responsible for its secrets, including the most important one: Abernathy’s isn’t just a bookstore. It’s the world’s only living oracle, producing prophecies to help fight the war against alien invaders bent on draining this world of its magic. Helena’s job is to find books to answer questions put to the oracle by the Wardens, fighters in the Long War. It seems simple enough, but Helena’s new job is anything but.

She has allies: her best friend Viv, from whom she has no secrets; Harry and Harriet Keller, elderly magi skilled at uncovering secrets; and the enigmatic Malcolm Campbell, warrior magus and one of the few who have faith in Helena’s abilities. But not everyone is thrilled that an outsider now has charge of one of the world’s most powerful magical entities. Helena must defend herself against the antagonism of Judy Rasmussen, who’d expected to be the next custodian of Abernathy’s, and her father William, powerful leader of the Wardens and someone with an agenda of his own.

Without training, without any knowledge of the magical world, and facing the hostility of those who’d wanted someone else to be Abernathy’s custodian, Helena must navigate the treacherous waters of her new world and find a place for herself within it. But there’s still a murderer on the loose, someone who intended to control Abernathy’s by killing its custodian—and Helena might be next on his list.

How to Download (Please use your PC for downloading)

Any problem about downloading or this file, Please Comment..