The Remora Shadow by Drew Stone 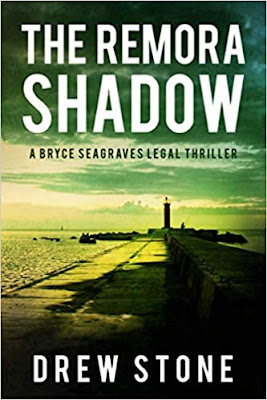 A dead man floating in the bay. A client concealing the truth. An anti-submarine drone that could start an all-out war. Attorney Bryce Seagraves has an impossible case. A defense contractor accuses his new client of espionage. She denies stealing the plans for a top-secret drone. Her boss is murdered.
The last person to speak with the victim was Seagraves, and now he is a suspect. Finding the killer would clear not only his client, but himself as well. Before the trial, Seagraves spars with federal investigators, aggressive lawyers, and covert agents. In court, he can never be sure if his client is innocent or guilty. Losing the case would devastate the woman he defends. Winning the case risks exposing a dark conspiracy. The Remora Shadow is a legal thriller that explores hidden clashes between espionage and the law.