The Lion's Prey by Camden Mays 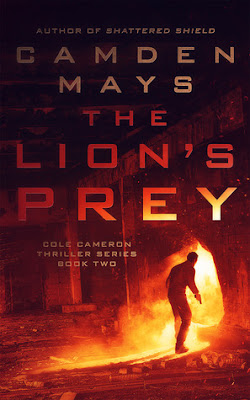 He stopped their attacks in America. Now he takes the fight to their soil.
Determined to eliminate the terrorist network that attacked his loved ones, decorated CIA officer Cole Cameron leads a field team in covert operations in some of the darkest regions of the world. His endeavor tests his soul and strains the relationship with FBI Special Agent Hannah Jacobs, as they struggle to nurture love in their fragmented lives.
His enemy, led by a mysterious new leader, called the Lion of Aden, is aligned with state sponsors seeking to cripple the United States infrastructure. Cole and his covert team continue to hunt down the elusive terrorist leader with the stakes higher than they imagined. As his success and reputation grow, so does the number of his enemies and their resolve to rid themselves of the disruptive efforts of the American spy. Soon the lion hunter becomes the lion’s prey.