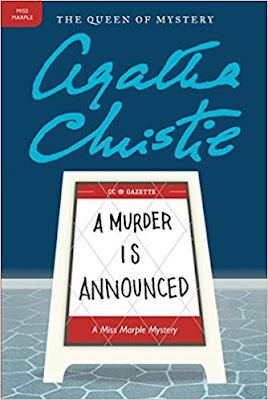 Promoted on both sides of the Atlantic as Agatha Christie's 50th book and published in 1950 by William Collins, A Murder is Announced is a staple of crime fiction and is often considered the best of all the Miss Marple novels. The villagers of Chipping Cleghorn, including Jane Marple, are agog with curiosity over an advertisement in the local gazette which reads: ‘A murder is announced and will take place on Friday October 29th, at Little Paddocks at 6.30 p.m.’ A childish practical joke? Or a hoax intended to scare poor Letitia Blacklock? Unable to resist the mysterious invitation, a crowd begins to gather at Little Paddocks at the appointed time when, without warning, the lights go out…

"One is alone when the last one who remembers is gone." - Miss Marple